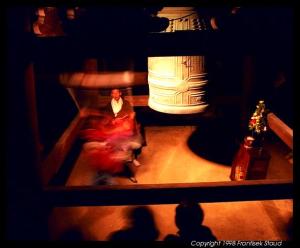 New Year’s Eve in Japan is not an occasion for partying (that happens with gusto during the cherry blossom season!) but instead is a time for reflection upon the passing year and for honouring the arrival of the coming new year. It is not sombre, though, because it is a time for communities to get together and share in bringing in the New Year. Temples around the country ring their great bells 108 times at midnight and throngs of people gather in the freezing cold for a chance to thrust the huge log ringer against the massive bronze bell, which is said to bring good luck for the coming year.

This tradition was observed even in the small rural village where I lived. I remember vividly the first New Year’s Eve I celebrated there in 1995 because it was snowing as I walked up the mountain pathway with my young children, who were so excited about having stayed up so late, joining the other villagers and their children as we made our way up to the temple. Although now fallen into a state of aged disrepair, needing far more money than this small village could ever hope to raise to bring it back to its former glory, the temple was once a large training centre, focussed on mountain asceticism. Now there was a single priest, who had inherited his position from his father and his father before him, and who was more often to be found in the local bar than in the temple! The belfry, however, was still quite grand. It was a separate standing bell tower of wood, which held a magnificent ancient bronze bell that was rung only on New Year’s Eve or in the event of fire, using a massive log which was held by ropes and swung onto the side of the bell, creating a wonderful deep sonorous gong.

We huddled around a huge brazier kept stoked with firewood from the mountain forest, everyone chatting and laughing as we waited for midnight. Although a time of reflection, it is also an important community event and gathered together in the dark, in the snow, in the middle of the night, everyone was excited and in a heightened good humour. There was a great kettle over a stove that held amazake, a thick sweet beverage made with the lees leftover from making sake, with freshly grated ginger and sweetened with sugar. A perfectly delicious hot drink to have while standing in the snow at midnight on New Year’s Eve.

The bell was rung 108 times, each gong made by one of the villagers. The priest insisted that my family go first because it was our first year in the village. At the base of the rickety steps the priest told us to clear our minds and hold in our hearts a feeling of gratitude for all the good things that had come our way in the past year, and that this feeling would make the bell sing. Actually, I was a little afraid that I might fall off the platform with the force needed to release the rope, but instead took a deep breath of cold snowy cleansing air and thought of all the blessings that I had received that year. I drew back the rope – let it swing in once, then back again to build up momentum, then… GONG! The deep sonorous sound vibrated throughout my body and I felt cleansed.

As I descended the steps on the other side of the tower, I was met by one of the village elders who carefully counted out and placed three peanuts in their shells into my hands. Thinking there was ritual significance to this act, I reverentially asked what the peanuts symbolised. The old man looked puzzled for a moment before saying, “It’s a snack!” I just burst out laughing because it was another good reminder to me that in Japan the sacred and mundane are not separate, yet everything you eat, thing and do can become a special moment of awareness and connection.

These days, back in Australia, with the kids all grown up and off doing their own New Year’s Eve things, my husband and I have a new tradition. We go down to a small lookout in Yalgorup National Park, from which you can see west out over the ocean, east out over a large estuary and hills, and north and south over the forest and bushland of the national park. It is a magnificent view. At sunset, watching the sun sinking into the Indian Ocean and the forest turning deep pink in the sunset, we use a prayer mala of 108 beads to name 108 things for which we are grateful. After listing these blessings I always feel filled with an enormous sense of gratitude for simply being alive in that moment, surrounded by the glorious beauty of nature, and my New Year wish is that I continue to be able to bring into my life that feeling of simple gratitude that I am able to appreciate this fact of being alive and feel the connection to the natural world of which I am a living part. Why not try it for yourself?

Happy New Year of the Snake to you all, and may your year be full of blessings and peace.