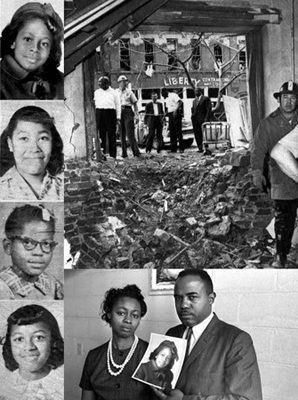 As my blog progresses, I would like to share with you some of the stories that other fellow pilgrims have sent me which I think are inspiring. Here is a letter from Deborah, who shares the story of her family’s involvement in helping to heal the wounds of the past in her hometown of Birmingham, Alabama. You can read more about the events that Deborah refers to in the article on the 16th Street Baptist Church Bombing in Wikipedia. It is a very shocking event, including the following laxity in obtaining a trial for the offenders. But Deborah’s letter shows that it is never too late to try to heal the wider big wounds that affect whole communities across generations. In contemporary Buddhism, this compassionate approach to connecting to others in a public way is known as ‘socially engaged Buddhism’. This means that although it is important to develop our own spiritual practice, it is also important to be active in helping to heal the collective wounds of the past by engaging in community action.

Recently I made a donation to a church in the US which is very dear to
my family. On September, 15th 1963, the KKK bombed Sixteenth Street
Baptist Church in Birmingham, Alabama. Four African-American girls
who were putting on their choir robes were killed instantly. Their
names were Addie Mae Collins, Denise McNair, Carole Robertson and
Cythia Wesley. I was 12 years old when it happened and I just
couldn’t understand why almost all whites in the South were
thrilled about it. My parents were appalled and I am so grateful to
them for raising us to treat all with equality. In 2003, Andrew and
I visited Birmingham. We went to Sixteenth St. to take the church
tour. We met the most amazing African-American woman
who has now become a dear friend of ours. I apologised to her and, to
my utter astonishment, she said no white person had ever asked her
forgiveness during the 20 years that she had been conducting her
‘tour ministry.’ The three of us sat down in the sanctuary and
cried.

Next year will be the 50th commemoration of the bombing and I asked
my friend to tell me how to send a donation to Sixteenth St. She
told me that her pet project was to finally install a handicapped
accessible bathroom in the church. I wrote a long letter to the
pastor, Rev. Arthur Price. I’ve met him several times and he is a
wonderful man and a great preacher in the African-American tradition! I
told him how much my mother loved Jesus and that she always told
us,’ a person’s character is what really matters. The colour of
their skin is irrelevant. Watch how a person, white or black,
treats others and you’ll know what kind of values they live by.’
Such incredible words from a woman who had grown up surrounded by
racism in her native Arkansas.

My friend just e-mailed me yesterday to say that Pastor Price read my
letter out to the Sunday congregation. That’s about 500 people with 2
choirs and a band! Well that made me weep for quite some time. I’m
so happy to be able to make sure that Alice is not forgotten. Andrew
and I are determined to be in Birmingham next year as Sixteenth St.
is going to honour Mom during the 50th commemoration activities.
I’m so proud!

3 thoughts on “Letter from Deborah”